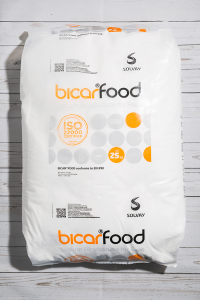 Under normal conditions, sodium bicarbonate is a white solid. It is produced by the process of the Solvay process, in which a mixture of water, ammonia, and sodium chloride (common salt) are reacted with carbon dioxide. Aqueous solutions of sodium bicarbonate are alkaline, because it is a salt of a strong base and a weak acid. For this reason, sodium bicarbonate is used for neutralization of acids (gastric juices at “ulcer”). Baking soda is a common ingredient in baking powder. The composition of baking powder includes more acids (eg citric acid) acid salts (hydrogen phosphates, etc.) That react upon wetting with soda by separating carbonic acid.

Sodium bicarbonate is registered as a food additive E500.