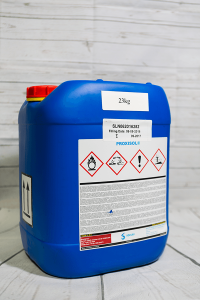 H2O2 is a clear, colorless liquid with a pungent odor at high concentrations to pale blue. Is amenable to mixing with water in all its states. The concentrated aqueous solutions are explosive. The temperature of the melt is -11 ° C (262,15 K), and the boiling temperature of 150,2 ° C (423,35 K).

By reaction of hydrogen peroxide with silver was separated para.Razlaga to oxygen and water by heating, under the influence of ultraviolet rays, and also in the presence of ions of transition metals. Strong oxidant. Prepared by reaction of oxygen and atomic hydrogen.

Hydrogen peroxide is used as bleaching agent of wool and cotton fabrics, leather, straw, in the manufacture of paper; in medicine as a disinfector; for bleaching hair. In the last decade it is used as a leading ingredient in the production of tooth whitening products in the US.