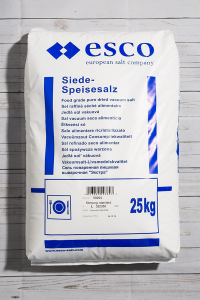 Sodium chloride, also known as table salt or simple salt, is a chemical substance with the chemical formula NaCl.

Sodium chloride is the salt, which to the greatest extent due to the salinity of the water in the seas and oceans, and the intracellular fluid of many multicellular organisms. It is widely used as a flavor enhancer and food.

Sodium chloride is essential for life on Earth. Most biological tissues and body fluids contain a certain amount of salt. The concentration of sodium ions in the blood is directly related to the regulation of the levels of body fluids. Proliferation of nerve impulses by signal transduction is regulated by sodium ions.

0.9% sodium chloride solution in water is called saline, as it is iso-osmotic with blood plasma. The salt is produced by evaporation of sea water or brackish water from other sources, for example, saline wells or ponds, as well as by the extraction of rock salt.

Sodium chloride is used as a flavor enhancer, a means for defrosting and as a dietary supplement.

Go to Top
This site uses cookies: Find out more.